In the VEX Robotics Competition, presented by the Robotics Education & Competition Foundation, teams of students are tasked with designing and building a robot to play against other teams from around the world in a game-based engineering challenge. Classroom STEM concepts are put to the test on the playing field as students learn lifelong skills in teamwork, leadership, communications, and more. Tournaments are held year-round at the regional, state, and national levels; local champions go on to compete against the best in the world at the VEX Robotics World Championship each April! 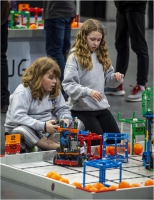 We currently run the following VEX Robotics Clubs during the week.

VEX Robotics Competition Tipping Point is played on a 12’x12’ square field configured as seen above. Two (2) Alliances – one (1) “red” and one (1) “blue” – composed of two (2) Teams each, compete in matches consisting of a fifteen (15) second Autonomous Period, followed by a one minute and forty-five second (1:45) Driver Controlled Period.

The object of the game is to attain a higher score than the opposing Alliance by Scoring Rings, moving Mobile Goals to Alliance Zones, and by Elevating on Platforms at the end of a Match.

VEX IQ Challenge Pitching In is played on a 6’ x 8’ rectangular field configured as seen above. Two robots compete in the Teamwork Challenge as an alliance in 60 second long teamwork matches, working collaboratively to score points.

NUAST host an annual regional competition in the school hall, inviting schools from around the country to compete in this years game. We are looking forward to seeing the teams there again this year!