At its heart, the field of Physics is a framework to describe how everything in our Universe happens. From the smallest particles to the largest galaxies, it is with Physics that observations can be explained.

From KS3 to 5 we have mapped the journey we take our students on here: 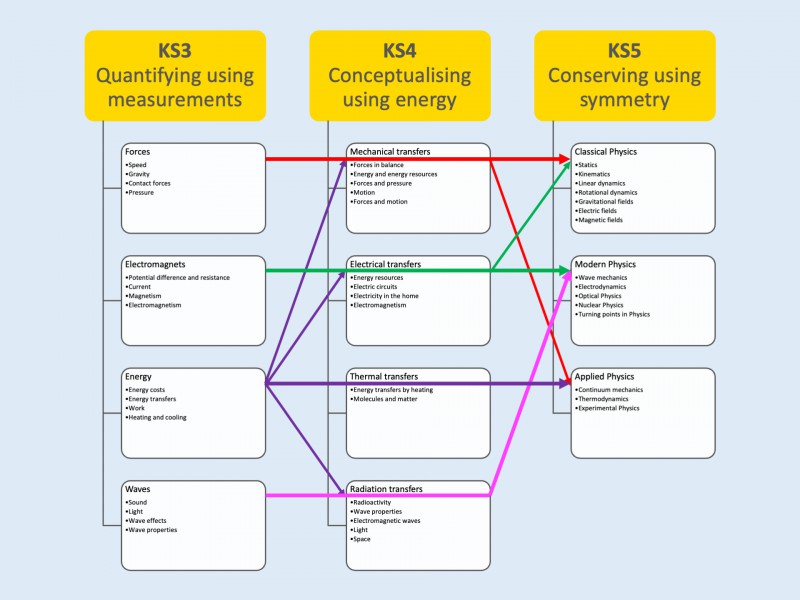 Our curriculum is built around three distinct skills which are focussed on in Physics. These are:

Quantifying is all about being able to describe our world as a Physicist would: through careful measurement and analysis. We do this by beginning to explore four big ideas which run throughout our curriculum. These are:

At KS4 our students use their now established ability to quantify a physical problem to begin to explain why it is happening. This relies on the key skill on conceptualising – of taking a problem and stripping away extraneous information to leave behind a system which can be modelled mathematically. In Physics, the underlying concept behind all phenomena is energy. Early in the course students learn to describe a system in terms of energy stores – where the energy is. Once this is established, the remainder of the course is spent explaining how energy moves from one store to another which we call an energy transfer. The four energy transfers they need to understand deeply form the structure of the KS4 curriculum which are:

We teach the AQA GCSE Higher Physics Specification to all students in Y10. From the end of Y10 a decision is made on tiering and so some students may move onto Foundation tier or Combined Foundation courses in order to maximise their outcomes.

A symmetry is any transformation that can be made to a system which doesn't change the physical laws of the system. It's like looking in a mirror. Even though everything is backwards, the same physical laws are true: gravity keeps your feet on the ground and electrostatics the electrons orbiting your atoms.

In the standard model of particle physics - the deepest and most powerful theory we have for describing the universe at the smallest of scales - there are three symmetries we are most interested in. These are:

Through the application of a theorem devised by Emmy Noether, it can be shown that any symmetry in a system has an associated conservation law. It is these laws (conservation of charge, momentum and energy) which we have built our KS5 curriculum around.

To do this, we took an idea which students embed throughout KS4 – conservation of energy – and looks to extend that to an additional two conservation laws: charge and momentum. This is because, as our students encounter more physical problems to explain, the skill of conceptualising a problem through only energy can become cumbersome. In this way, our students are beginning to break down a problem in a very deep way which uniquely prepares them for further study in Physics but also in other complex fields such as medicine.

These three conservation laws are present in all areas of our course and are the central ideas which we keep coming back to and exploring. We do this through the study of three broad themes in Physics. These are listed here with their relevant topics below:

Through the study of Classical Physics or students develop solid foundational skills in Physics which can be used to describe and predict the vast majority of interactions observed in day-to-day life. This is a crucial theme for students seeking to develop advanced problem solving skills for applications to study courses such as engineering or medicine.

The big ideas most relevant to Classical Physics are those of Forces and Electromagnets so consequently it is the skill of applying the conservation laws of momentum and energy which are most readily and frequently developed in this theme of the course.

Exploring how Physics developed from its earliest formulation as a field right up to the beginnings of the Quantum age, it is in Modern Physics that our students encounter an enormous range of physical phenomena and the fascinating ways these are explained. As a part of our enriched curriculum we expose our students in appropriate contexts to advanced modeling techniques which they would encounter in the early years of a Natural Science degree.

The big ideas most relevant to Modern Physics are those of Electromagnets and Waves so consequently it is the skill of applying the conservation laws of charge and energy which are most readily and frequently developed in this theme of the course.

We teach the AQA A Level Physics Specification with the Turning Points in Physics optional module. We are looking to expand the optional module offering in 2023 to offer Medical Physics, Electronic Physics, Astrophysics and Further Mechanics options also.

We are a AQA-certified required practical centre and so offer an extended range of practical opportunities according to the AQA practical specification.